September 2016 Yard of the Month 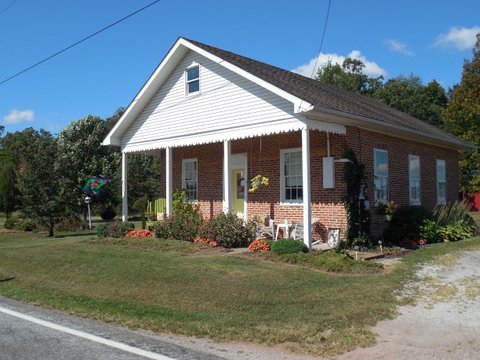 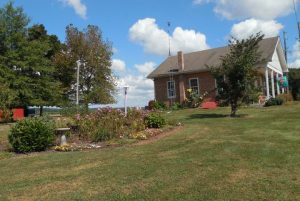 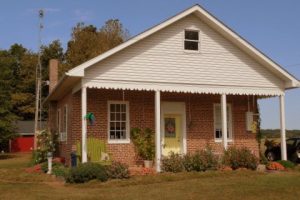 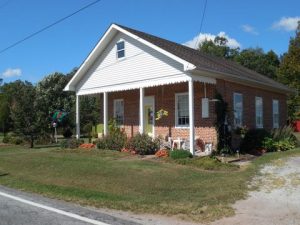 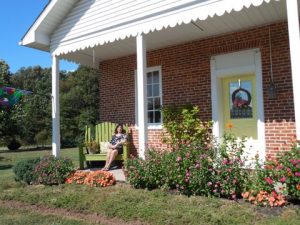 The Gettysburg Garden Club, through its Yard of the Month Committee, has presented its September 2016, Award of the Month to Bonnie Yingling, 755 Barlow Rd. for her small property landscaping. (Note: although this property totals ¾ acre, the small landscaped area around the house was the Committee’s main focus.)

Let’s go down Memory Lane for a moment. Centennial Hall School, on Barlow Road, was built in the 1830s, for first through eighth grade girls and boys. His and her toilets were behind the brick school, and a well, now capped, stood at the ready near the front door. Beneath the little school was a root cellar, while an attic rested above the 9 ½ foot high ceiling of the classroom. Old photos show that landscaping was non-existent, just like a paved road!

In 1946, it closed its doors as a school and became a private dwelling. Eventually, interior walls and indoor plumbing were added, while ownership changed hands several times. This is where Bonnie Yingling came in.

She was raised in nearby Taneytown, married in 1970, and moved nearby. Her then husband had bought this tiny home from his mother in 1969 as a rental property, which it remained, until Bonnie moved there in1993. By then, the little house needed some TLC, which she provided. Now retired from the banking industry, and very active in her church, Bonnie has enjoyed researching old deeds and other records in order to learn more about “her” little school.

On the outside, when she moved in, there was only an overgrown bed of lilacs, to the left of the house, which she removed and made into a lovely oval flower bed. Here she has planted tall phlox; hydrangeas; a dogwood tree; hibiscus; daylilies; and, a row of creeping phlox. Hugging the house, along the left, right, and front sides, are more neatly cared for flowerbeds, again bordered with creeping phlox, which creates its own continuous line of color in early spring.

The left side of this tiny, 717 square foot home is a sun-filled side, and here Bonnie has focused on hydrangeas; columbine; day lilies; chrysanthemums; and pink bleeding heart; with a lovely yellow rosebush towering like the tallest student, in the middle. For added accent, there stands a pedestal on which sits a light blue crinkled-glass globe, capturing light from several directions.

Along the right side of the house, where the sun does not quite have full reach, Bonnie has planted shade-loving hostas, catnip for her cat, Baptisia Australis, and more impatiens. Closer to the front of the house she has a potted mandevilla on a shepherd’s hook, and an ivy vine which contentedly grows up the front corner of the old brick school, towering over the other plants, like the teacher waiting to greet her students!

A small porch, original to the school, extends along the entire front of the little home, allowing just enough space for a pretty light green bench, made by a friend; a huge potted hibiscus which retreats indoors for the winter, where it grows beautiful blooms to cheer its owner; plus two white rattan rockers and table. Nearby hangs a geranium, which sometimes rests on the end of the bench. The inviting front door is a soft yellow which coordinates well with the bench, light yellow rosebush, and the light-green leaves of a nearby hanging sweet potato vine.

In front of the porch, the flowerbed is home to several chrysanthemums, pretty coral-colored impatiens, and many taller zinnias of mixed colors. These short and tall, bright and cheery blooms remind the viewer of excited school children waving to their friends as they arrive to begin their day!

She stated that she has always loved flowers — – especially the creeping phlox. She has bought perennials that she likes, saying that their low cost and reliability make them a good buy. She then adds annuals such as zinnias and impatiens, as needed, sometimes also altering their locations for her pleasure. This has resulted in a happy span of colors and plants that live together very harmoniously, like those happy schoolmates, with no behavior issues. Bonnie does not amend her soil nor does she fertilize, because, according to her, she has naturally good soil, although she does water every evening as needed. The biggest concern she has with any of her gardening practices is the lack of blooms on her hydrangeas this year, although the plants appear very healthy.

Over the years she has bought maple, redbud, and dogwood saplings from her church, adding them to replace the five huge 150+ year- old oak trees, blown down in 1996, by a microburst that also destroyed the tin roof and some of the beautiful original wood schoolhouse flooring. Asked about advice for novice landscapers, Bonnie replied, “Get the soil in good condition.” “Plant for visibility for passers-by.” and “Know the plant size and allow [space] for its growth.” She added, “Pick what you like; start there.” She also suggested buying plants from clearance trays at the end of the season.

Bonnie stated that she determined her flower bed sizes according to the mature plant sizes, which is crucial to landscaping success. She pays careful attention to her creeping phlox, especially, which can become unruly, like a small child. She also believes that reading plant labels before buying helps eliminate later problems.

Sitting on her front porch, in the evening, is a wonderful way to relax for Bonnie. She is happiest when everything is in full bloom, and her happiest place is her large oval flower bed at the side of her happy little home.

When asked if she enjoys yard work/gardening, Bonnie answered, “Yes, because I like the results.” We like your results too, Bonnie. Congratulations!

If you wish to nominate your or someone else’s property for the Award of the Month, please call Lorainne Farmer at 253-7730, or submit your nomination online.

Posted On August 5, 2016 ~ 0 Comments
The Gettysburg Garden Club, through its Yard of the Month Committee, is pleased to present its Award of the Month for July 2016, to Jack…