September 2015 Yard of the Month 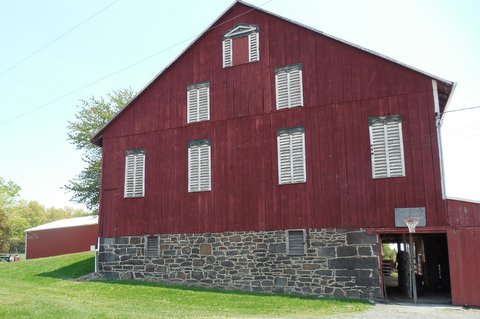 The gallery was not found!

The Gettysburg Garden Club is pleased to announce that its September 2015 Award of the Month goes to the many local farmers who work long hours, holidays, and weekends on our behalf. Chosen to accept this honor on their behalf are Yvonne and Clarence Andrew whose cattle and hay farm is located at 199 Blacksmith Shop Rd, Gettysburg.

Clarence, born and raised on the adjacent property, and Yvonne, in Wellsboro by way of Carlisle, were introduced by friends. When they married in 1988, they moved into the farmhouse next door, built in 1900 by his grandparents.

Their landscaped area is at the street end of the house, which is naturally resplendent with huge boulders, which makes for a great landscaping feature. As Yvonne says, “The bones were already there.” These boulders coexist peacefully and protectively with the flowers and plants that Yvonne has added over the years. Here the ground slopes away, and here Clarence has placed several flat­topped boulders to serve as steps to the lower area. The towering sumac, ash, and wild cherry trees interspersed with the boulders and plants on this part of the property make for nice shade without blocking the view. Here, sitting in the shade on one of the boulder steps, is where Yvonne most enjoys spending outdoor time.

Yvonne noted that friends and family gave her the cuttings, seeds, and small plants, from which her landscaping evolved. She can still match each person to each gift perfectly.They also did a little rearranging of what was already growing naturally on their property: they moved a small redbud and a maple tree to the top of the slope to form a backdrop for this area.

Nestled among the boulders to one side of the steps are some ajugala, sedum, coral bells, hostas, and a boxwood, all watched over by one of the large sumacs, and a sweet­looking little fairy.

On the other side of the steps, among more boulders, are a knock­out rose; some vinca; a rhododendron; an azalea; some columbine; and a taller burning bush and winterberry, all proudly displaying themselves beneath another sumac tree and a white lilac tree. In the grassy area at the bottom of the slope are several of the wild cherry, ash, and sumac trees, all tall and grand, and waiting for a nice breeze. Proudly displayed against a tree for all to see is an old two bottom plow that Clarence remembers using as a young person. Being a hard­working farmer­­­­­and what farmer doesn’t work hard­­­­­Clarence does not have much free time to indulge in gardening, although he does help Yvonne by doing the heavy work. They do believe in recycling: he made the huge dragon that she designed and which sits in a level side yard where the children could play, and the grandchildren still enjoy. Its body is made of old tires half­inserted into the ground, with a long neck and head of recycled field harvester, tractor lights, and boiler and tractor parts. This piece of whimsy is best described as fierce juxtaposed with friendly! Even the address sign by the road is hanging from a small recycled tree trunk with roots, which is “planted” upside down, a naturally lovely piece of artwork.

Both say they were always interested in gardening. Still actively farming, he readily calls hay his favorite plant! Yvonne calls whatever is showy at the moment her favorite, whether it be “…..winterberry, sedum, or rose blooms.” And she always looks forward to the next flower “show.” Their least favorites? She says the poison ivy, which is especially bad this year. For him, it is the Canadian thistle, which fills his fields.

When asked the easiest plant to grow, Yvonne stated that the sweet annie and sedum win that prize. As for the most difficult? Without a doubt, it is the rose bush, due to the beetles and aphids, which she does not use chemicals/sprays on. (She is a conscientious gardener who uses vinegar or boiling water to kill weeds in her stone walkway.)

Asked for advice for a novice gardener, she replied that “It doesn’t have to be perfect.” “Enjoy each season.” “Don’t think of it as a chore.” And, don’t stress over it; remember that “Some will grow and some will go!” For someone with the desire to landscape but with little money, Yvonne said to “Pull from Mother Nature.” “Share” and swap cuttings, seeds, or plants with family and friends. What did she wish she had known early on? Her answer was a quick “Keep it simple.” And, finally, when asked what she would like to learn from a gardener , she replied she would just “…..like to share thoughts and ideas.”

Asked to describe their property, Yvonne replied, “It is like being on a wonderful vacation.” Clarence stated he is “…..living a dream, owning this farm.” This friendly and gracious farmer and farmer’s wife are the “real deal.” They love their home, their farm, and their part in its history. They are the perfect representatives for the Award if the Month honoring farmers. The Gettysburg Garden Club salutes all 17325 farmers.

Next month will be the last of the 2015 summer season Award of the Month articles. If you have any ideas for improving this feature, please call Lorainne Farmer at (717) 253­7730

Posted On May 4, 2018 ~ 0 Comments
Once a Gardner, Always a Gardner The Gettysburg Garden Club, through its Garden of the Month committee, is pleased to present the Garden of the…