October 2016 Yard of the Month 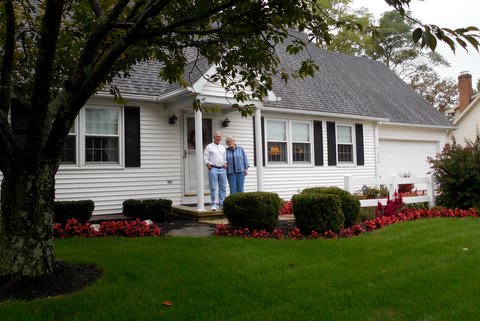 Gettysburg Garden Club, through its Yard of the Month Committee, is pleased to
announce its October Award of the Month. Nominated for this award by Janet Powers, Sara and
Kenneth Mummert of 516 McMillan Street, represent all gardeners whose landscaping efforts
were nominated this season.

Sara, born in Gettysburg, and Kenneth, adopted and raised in the area, met in high
school, and the rest is history, as the saying goes. Until their retirements, she was a Lutheran
Seminary librarian and he a Met-Ed lineman. They now greatly enjoy spending time with their
grandchildren and taking cruises.

Kenneth found their perfect lot in 1987. With the Battlefield behind, Steven’s Run
flowing through, and an easy walk to work, the decision to buy was an easy one. The Battlefield
trees were later removed by the National Park Service, creating a beautiful, open, sunset view.
After building their home they began landscaping by hiring a professional to plant
several larger things: Judas trees in the rear, and a Bradford pear and cherry tree in the front,
along with several hollies and yews. Sara’s mother, aunt, and several friends provided her with
plants from their gardens to help her get started. The pear tree was later removed due to wind
damage, resulting in Sara and Kenneth’s decision, in 2007, to hire a landscaper, whose idea it
was to add two white fences.

Today, the pretty, white, two-story house with the dark roof and black shutters, stands
as the perfect backdrop for a vibrant red flower show. Yet, this design would best be described
as a red and white one, due to the two pristine white fences set among red flowers in the middle
of two well-tended beds: a long one wrapping around the house from the back, across the front,
and ending at the driveway; and a smaller one across the driveway, adjacent to the sidewalk.
Each bed is bordered its entire length by an energetic but well-behaved, row of red wax leaf begonias.

The long bed widens as it rounds the corner from the side, to accommodate a cement walkway leading from the front door to the driveway. This walk is bordered on its back side by 6 classy red azaleas and another row of red begonias. The front door sports a red wreath, while in front and to the left stand 3 neatly-trimmed boxwoods and English yews; and, at the corner a holly. Around the corner 4 yews, interspersed with yellow coreopsis, a butterfly bush, and graceful Canterbury bells, fill the space.

The long, L-shaped fence is perfectly at home in the middle of this long bed. In this bed proudly stands Sara’s favorite plant — – a vibrant red crepe myrtle, plus 3 weigelas, and 3 red daylilies. Filling in the space are more cheerful coreopsis, white liriope, and vibrant red celosias. Across the driveway is the smaller flower bed, with its L-shaped fence off-set from the edge of the bed, and English yews for backdrop. Filling the space between the border row of begonias and the yews are more red celosias erupting with color, happy yellow coreopsis, and white petunias and yellow snapdragons peeping out at passersby, plus another showy red crepe myrtle. The white mailbox adds accent as it rests in the bed near the corner of the fence. At the front right corner of the garage stands a small bed with a holly and myrtle beneath. In the lawn, adjacent to it, are several stepping stones creating a path to the rear of the property between that bed and another, larger bed with 3 hollies, a red twig dogwood, and myrtle beneath.

As accents, on each side of the garage door rests a white pot holding white petunias, red celosias and begonias, with maroon spike plants for height. The red and white color design and ever-present American flag at the corner of the house make for easy patriotic holiday decorating, according to Kenneth.

Although the soil beneath the grass is only 2” deep before hitting bedrock, and the property was used for construction trash before Sara and Kenneth purchased it, their grass looks healthy due to the help of a lawn service who does the fertilizing for them. He also has the trees sprayed each year to stay ahead of the beetles, which were very bad this year. According to Sara, their landscape plan mostly “…just evolved.” Kenneth used a hoe to dig the shape of each bed, preferring wavy or kidney-shape, but not laying out a hose or using spray paint to guide him. He just, “…did it.” When asked what they would do differently next time, in unison they replied, “Nothing!”

When asked the most difficult plant to grow, Kenneth quickly stated, “Everything grows well for her!” When asked the easiest plant to grow, he flashed a smile and said, “Weeds!” Advice for a novice gardener, Kenneth and Sara both stated, would be to “Plant trees and bushes first; trees provide shade.” Advice for would-be gardeners with little money is to “Do it themselves.” And, “Get plants from friends.”

This property has personality, is full of energy, and shows well. The reds in the beds instantly create a bright red uproar of color, almost as though being kissed in admiration by Mother Nature’s own lips!

Although they claim not to be gardeners, Sara claiming she does it “..for the results.” and that they do it “…just do it for fun,” the evidence is against them! Congratulations to Sara and Kenneth for their beautiful property.

This is the last award for this season. It will begin again in April, 2017. If you wish to nominate your, or someone else’s, property at that time, please call Lorainne Farmer, Yard of the Month Committee Chair, at (717) 253-7730. Also, please see our display of this season’s award recipients, in the Gettysburg Library this month.

August 2019 Garden of the Month

August 2018 Garden of the Month