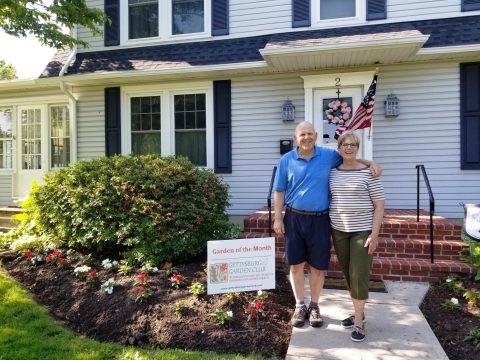 The first thing that Mike said was “This isn’t a garden, it’s just a bunch of random plants.” However all those random plants flow well shifting from one area into the next that it all works well together as if it were a large cohesive plan. Not only are there many different plants but they come from different states, neighbors, and time periods. Starting with the front yard the trees consist of a red maple, Bradford pears (2 of which have already been removed), and a large pecan tree that was planted many years ago by a former owner and now houses a plastic snake to keep the grandson entertained. With all the trees this is where they have their shade plants bordering their house. Azaleas, hostas, pachysandra, Italian lords and ladies Arum italicum that were given to them from a friend in VA, ferns from some neighbors, and bridal wreath spirea that they have moved from another location. They had impatiens planted there until the owner of a local greenhouse stopped by the one day and told them that the reason they were struggling growing them is because they needed to plant new guinea impatiens for the shady area. Since then they haven’t had any trouble keeping some color in the front yard. To the right of the house there is a garage with a wisteria vine also planted by the former owner but Mary says it hasn’t really flowered in a long time. There are also ferns lining the black iron fence with peonies in front. The green leafy background makes the peony flowers really pop and it makes a classic looking border that is more exciting than just a row of boxwoods.

Along the Carlisle St side of the property is their Christmas tree. Out in the yard all by itself this lonely tree is just waiting for winter time to be decorated. Alongside the house are some daylilies, wine and rose weiglas, buddleia (butterfly bush), and soon they will be planting zinnias, one of Mary’s favorites. Mike and Mary love to attract pollinators. In front of their parking pad, are some gorgeous Nandina domestica bushes that have green foliage that turns a rusty color and the plant will get red clusters of berries and a white hibiscus that gets flowers the size of a dish.

Then you reach the rose arbor. This rose bush with light pink almost white roses is over 100 years old and was given to Mike for the daughter of the pharmacy that used to be downtown in Gettysburg. She didn’t want the rose destroyed when the business was sold so she gave it to Mike since he knew how to take good care of roses. As you walk under the arbor there is the rest of his rose garden on the right. Some pinks and some reds proudly offering a backdrop to a garden flag that was drawn by the grandson of a white cat with pink and red roses with a lime green background. On the left of the walk way the yard is lined with arborvitae for privacy, some mint and volunteer zinnias are scattered along the ground with trellis’s that support sweet peas and moonflowers. Behind the rose garden is a trellis of trumpet vine and then there is a water garden. Mike installed the water garden about 20years ago and along with the koi are water lilies and iris’s. Beyond the water garden are some Shasta daisies another of Mary’s favorites. Then you reach the back stairs and deck. Protected by bamboo that came from a neighbor’s house 20years ago, they can have privacy while dining outside eating BLT’s from the tomato plants that are growing in pots along the deck. While Mike and Mary have put a lot of time and work into their “random” garden, I realized that they put more time into being good neighbors. In the short time that I was getting the tour of their gardens they had 3 neighbors of whom stopped and chatted about their lives.

One neighbor even made the comment that the Malewickis’ must get sore arms from all the waving they do while standing in their yard. So when you put forth a friendly effort sometimes you get rewarded by getting plants from your neighbors to add to your menagerie.

To nominate your property or someone else’s for the Garden of the Month award please call or text Deb Steckler at (717) 357-3623 or fill out our form.

September 2015 Yard of the Month

Posted On September 16, 2015 ~ 0 Comments
The Gettysburg Garden Club is pleased to announce that its September 2015 Award of the Month goes to the many local farmers who work long hours,…

Posted On July 4, 2019 ~ 0 Comments
The Gettysburg Garden Club through its Garden of the Month Committee is pleased to present the garden of the month award to Tom and Erika…