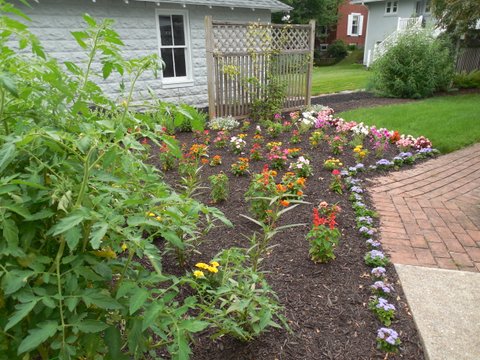 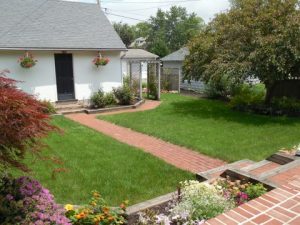 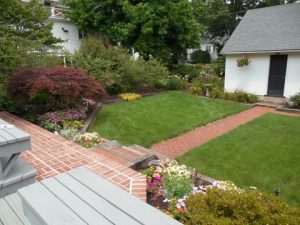 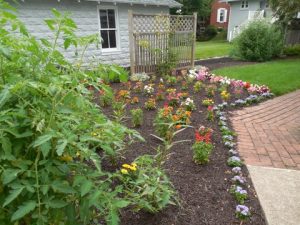 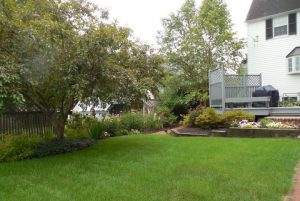 A drive up Springs Avenue is always a lovely drive, but when Jack and Bobbie bought this 1913 Dutch Colonial house in 1970, it was in need of some TLC. They met and married in Pensacola, Fla. eventually moving to Gettysburg to continue his legal career, and set about the work of remodeling and landscaping. Today he is in partnership with his son, while she works part time in their office.

From the front, the property has a graceful appeal, with its foundation plants marrying the pretty white home to the tidy green lawn. But the real view is from the back alley, where the property dances with color. Here, Jack built a bi-level, angular-design deck with an attached lower-level patio, adding to the rear garden’s appeal. The first things he planted were lilies, astilbe, coreopsis, azalea and day lilies. In this 60’ by approximately 70’ rear space (which includes garage, deck, and  patio), he planted a maple which now very nicely shades the deck, and a Japanese split-leaf maple which gracefully anchors the corner of the patio; plus birch, crabapple, and double-form viburnum for variety and balance. Chokeberries, and hydrangeas with their lower branches trimmed, add interest at the sides of the property. The varying textures and sizes of these trees and large bushes play well as backdrops for the beautiful green and variegated hosta, fern, phlox, spirea, impatiens, and periwinkle below.

A brick walk leading from the middle of the patio to the detached garage separates two narrow flower beds bordering the patio, which mirror each other with their array of lantana, wave petunia, spurge, gerbera daisy, bee balm, and spike plant, among others. But this is just the beginning!

Along the west side of the garage is a stone path to the alley, on each side of which are beautiful bright-colored shasta daisies, yellow day lilies, yellow coreopsis, phlox, coneflower, pink astilbe, hosta, fern, pink azalea, the viburnum, and other lilies, as well as a birdbath. Along the garage wall facing the house are mixed color lilies, hybridized for long-term bloom; roses; and two hanging baskets of red geraniums.

On the east side of the garage, the brick path from the patio to the alley, leads through a trellis hosting a blue clematis vine and hostas. On the other side of this path is Jack’s annual garden, with its array of colors. Here, at the alley’s edge, is a neat row of tomato plants, marigolds at their feet, backing a neat bed of flowers. First come butterfly weed, salvia, and marigold; then rows of salvia; zinnias; vinca; dwarf marigold; dwarf snapdragon and petunias; finishing with shorter begonias. Along the far side, facing the rows, is a white clematis vine bordered by sedum and white alyssum.

Farther along this east side of the property, coming toward the house, is a large butterfly bush; the crabapple with fern, spirea, and periwinkle beneath; followed by beautiful, tall gladiolas of various colors; periwinkle; coneflower; dianthus; and  japonica; and nearby, a beauty bush and cranberry viburnum.

As with most awarded properties, there is more to this; it is full of lovely greens and colors, thoughtfully planned and laid out with the help of Country Markets (now Stauffers) over 40 years ago, and maintained by Jack since. It is a private and restful oasis where the homeowners can sit and enjoy its beauty, as well as the sounds of the birds that frequent the trees and show their pecking order at the birdbath, and the funny antics of the chipmunks and squirrels. This is a real source of joy for Jack and Bobbie. He is the landscaper, having learned on his grandmother’s farm and his father’s Victory Garden; she is the homescaper, creating beauty on the inside.

Their thick, healthy grass got its start many years ago when sod was laid and pieced together well. He aerates every 3-4 years, overseeds every fall, and keeps as good an eye on grass soil as he does on garden soil, by using inexpensive soil tests to monitor and amend as needed.

Jack states that he most enjoys how each plant has its place in the scheme of things, plus the real beauty in the various clematis vines, and the array of colors on the flowers. Bobbie enjoys “…the tomatoes, the only vegetable Jack grows.” She also likes floating a huge, beautiful bloom from the garden in a glass bowl with water.

The easiest plant to grow? “Weeds!” says Jack, mischievously. Then he adds “The annuals.” The most difficult part of gardening to him is, “Plants that are put in the wrong spot, like a hydrangea that droops on hot, dry days.”

According to Jack, the first things to do when landscaping, are “Visualize how you want it to look in 20-30 years, marry the house to the ground [plant along the foundation of the house], and plant trees.” He added, “Talk to someone who can mentor you, and carefully size the plants to be landscaped [to their future space needs].” Finally, “Remember that it is important not to do too much at once; do one project at a time.”

For the novice gardener? Jack, a Master Gardener, says, “Go to the library for simplistic instruction gardening books, talk to Master Gardeners and your neighbors.” He is also adamant  about buying  “…..good basic tools: pointed shovel, spade, fork spade, loppers, quality pruners, and eventually a tree saw.”  Congratulations to Jack and Bobbie for  their “happy back gardens” that will continue to bloom and change and delight.

If you would like to nominate a property, whether yours or another’s, please call Lorainne Farmer at (7176) 253-7730, or visit our website at www.gettysburggardenclub.com before August 2nd.

Posted On May 31, 2017 ~ 0 Comments
Garden Club Award of the Month---“Making it Pretty” The Gettysburg Garden Club, through its Yard of the Month Committee, is pleased to present its Award…

Posted On August 19, 2016 ~ 0 Comments
The Gettysburg Garden Club, through its Yard of the Month Committee, is pleased to announce that its August 2016, Award of the Month goes to…

Posted On June 19, 2016 ~ 0 Comments
The Gettysburg Garden Club, through its Yard of the Month Committee, is pleased to present its June, 2016, Award of the Month to Jeannette and…