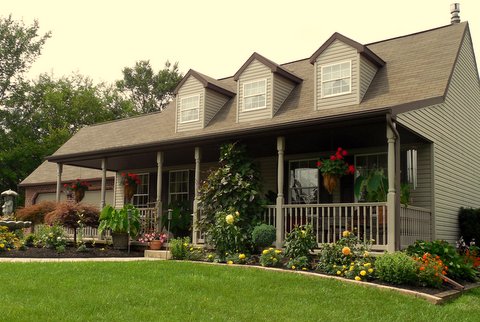 The gallery was not found!

The Gettysburg Garden Club has named Ricky and Beverly Nell, of 635 Boyd’s School Rd., the Award of the Month recipients for July 2015. When asked to describe their property, the Nells’ both responded with “…..country, quaint, and to our taste.” Ricky, from York, and Beverly, from Hanover, in 2002 bought a lot close to his place of employment at Herff Jones. Convenience came with a price, though, as truckloads of fill dirt and topsoil first had to be added to the property, which at that time was considered a wetland. Finally, drainage issues had to be resolved.

Today, when driving by this vibrantly colorful property, one first notices the steep drainage ditch along the front, now an integral part of the landscaping. Not content to just let the jagged white rocks lining the steep ditch control the erosion, Ricky has scattered cattail plants along the bottom, and short, airy looking native plants of unknown name here and there among the rocks for color and soft contrast.

Because Beverly prefers yellow flowers (think marigolds) Ricky has focused mainly on shades of flowering yellows and oranges from dahlias, sunflowers, zinnias, yarrows, cosmos, daylilies, rudbeckia, and marigolds, when planning their flower beds. Then he added additional color with bottlebrush, geraniums, hostas, ajuga, other zinnias, and coneflowers. Finally, Ricky showcased some green and purple hyacinth bean vines (his favorite), with elephant ears and Boston ferns as surprise elements. Each plant has been placed with full consideration for its size, shape, texture, “curb appeal,” and continuing flow of color around the property.

Along the top of the ditch is a painted threerail fence acting as an open backdrop for a tidy row of sedums interspersed with orange colored cosmos, daylilies, and zinnias. The left end of the fence angles away from the ditch to create a slightly wider spot by the driveway for rudbeckias, zinnias, dahlias, and a yucca, all acting as official greeters to visitors entering the property. Near the right end of the fence stand several sunflowers, protecting short, dark green and purple leaf ajuga. Growing on the fence posts are the beginnings of hyacinth bean vines with their deep purple stems, and green and purple leaves.

Behind and parallel to the fence, is a neat row of Bradford pear trees. One can see between and over the fence rails, making the area feel very open. Yet, at the same time, the tree branches slightly block the house from a totally clear view, thus acting as a teaser, causing the observer to crave more.

The weathered, solid wood fence along the right side of the property serves not only to showcase Beverly’s outhouse (tool house) which stands angled between rudbeckias and daylilies, but also the coneflowers, zinnias, Mexican sun flowers, hostas, mums, yarrows, and bottlebrush. Like a good teacher, Ricky has taken great care to determine that each plant “child” is in the right spot. He admits, though, that trial and error has often been his instruction manual.

Nestled among the ornamental grasses to the left of the driveway one finds another, smaller, nod to Beverly’s enjoyment of the whimsicality of outhouses. Further up the drive, as one approaches the front porch, the sound of a waterfall feature children under an umbrella draws one in, from where the eye goes to two small Japanese maples, an old birdhouse set beside a stone, and more sedum, cosmos, zinnias, dahlias, and daylilies. In front of the right half of the porch is another trim bed holding more gorgeous dahlias, marigolds, and sedum. A very large hyacinth bean vine between two posts near the front step appears to be reaching for the posts to balance the planted bed with the waterfall to the left. Overhead are several coneshaped hanging baskets of geraniums, providing a deeper flower color that pairs well with the vibrant greens of a pair of huge, very healthy, potted elephant ears strutting their stuff on the porch.

When asked for advice to a novice gardener, Beverly and Ricky both emphatically stated, “Patience.” Ricky was quick to warn not to crowd plants in the beginning. Know the plants! They often outgrow the space in which they were planted, so it is imperative to plant for the future, with plenty of space, and be patient! Beverly emphasized the importance of the soil. Mulching, amending, fertilizing, and rototilling are all important for the health of the soil, therefore the health of the plants.

It is evident that these two gardeners really enjoy their property, each in his and her own way: he enjoys “…caring for the plants, watering them, and trying new ideas,” while she gets her greatest satisfaction from watching him “…..work his labor of love.”

September 2016 Yard of the Month