August 2019 Garden of the Month 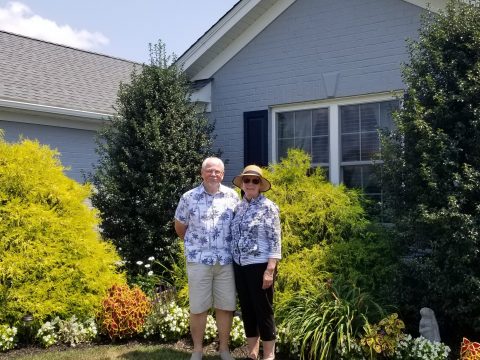 As I walked up the curved sidewalk to the inset front door of the Castonguay’s slate colored ranch home, I couldn’t help but feel welcomed by a bench to the right of the door and potted bonsais to the left. It was like entering a private outdoor cubby where one could read the morning paper and enjoy a cup of coffee. Which after talking to Mary, she does along with her cat curled up beside her. Terry and Mary have lived in Cannon Ridge for 3 years after downsizing from living at the Links. When they moved into their current home they removed pretty much everything except the trees. Mary had the idea of what she wanted and where to place it and Terry implemented.

After painting the brick house grayish blue, Mary wanted the front yard to compliment the home so there is a front bed of purple salvia, variegated and non-variegated lirope, lavender, blue fescue grass, dianthus, Russian sage, deep purple veronica, perennial geranium and a specimen tree that is a lion’s head maple that will grow 8’-10’ tall. Along the curved sidewalk the purple and white theme continues with lamb’s ear, Shasta daisies and some white new guinea inpatients placed among more of the veronica, salvia and lirope. The is one lonely holly bush that they brought from their home in Michigan that they will be giving to a neighbor once it gets too big for the spot in which it is currently growing. Mary also has some whimsical items such as a large lantern, a concrete duck family, a concrete bunny and a wind vane among the plants. As you get closer to the front of the home there are large hollies and gold mounds with daylilies of a burgundy colored bloom and coleus creating curves to break up the square lines of the home.

Around the side of the home is a Yoshino cherry tree and some rose of sharons. Peonies, sedum and weiglia line the house until you reach a raspberry and blueberry bush. Coming around the corner of a butterfly bush and a Magnolia are pots of tomatoes and peppers and a pot that Terry refers to as his nursery. He is growing some seedling trees in the pot until they are big enough to stand on their own.

The back yard is completely different than the front. The color scheme matches the patio umbrella of vibrant oranges and reds. Marigolds, coral bells, hibiscus, coreopsis and zebra grasses give the backyard a warm sunny feeling in contrast to the cool relaxing front yard. There is a shade garden along the back border with tall trees casting shadows on hostas and Asiatic lilies. There is a raised box in which Mary bought one of those bags of wildflower mixes and planted. One sunflower is surrounded by sweet peas, cornflower, statice, daisies and many other flowers that will most likely reseed themselves for next year. Mary and Terry enjoy pollinators such as the butterflies and birds that visit their garden and have many feeders (seed and hummingbird) and houses for the birds to enjoy.

Planted on the garage side of the house Mary being Finnish has the flower of Finland the lily of the valley, azalea bushes, a bag of random bulbs which turned out to be gladiolus, liatrus, and dahlias, calla lilies and several hydrangea varieties from pinks to whites to lime light green. At the front of the garage is a large pot with sweet potato vine and canna lilies.

Mary and Terry Castonguay have done a great job of creating a flowing cohesive garden of many different varieties of plants of which they knew all the names. Transititioning from cool tones to warm tones from flowers to shrubs to fruits and vegetable to bulbs to potted plants, this garden took a lot of planning. So if you are thinking about planting a garden take a few moments and think about what you want the end result to look like before just buying whatever plant is on sale for the week. True it may look great in your cart but will it look great in your yard?

To nominate your property or someone else’s for the Garden of the Month award please call or text Deb Steckler at (717) 357-3623 or fill out our form. 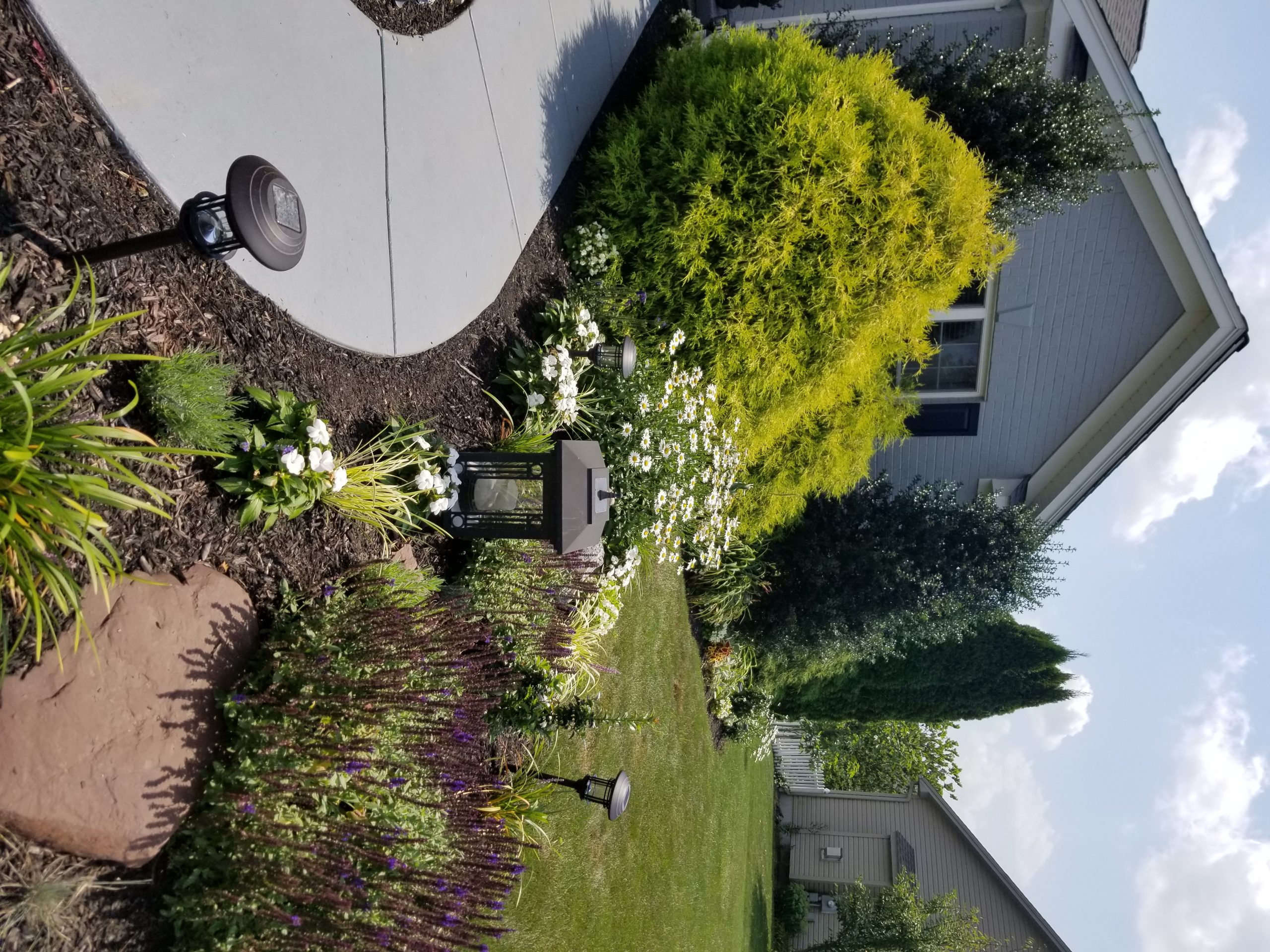 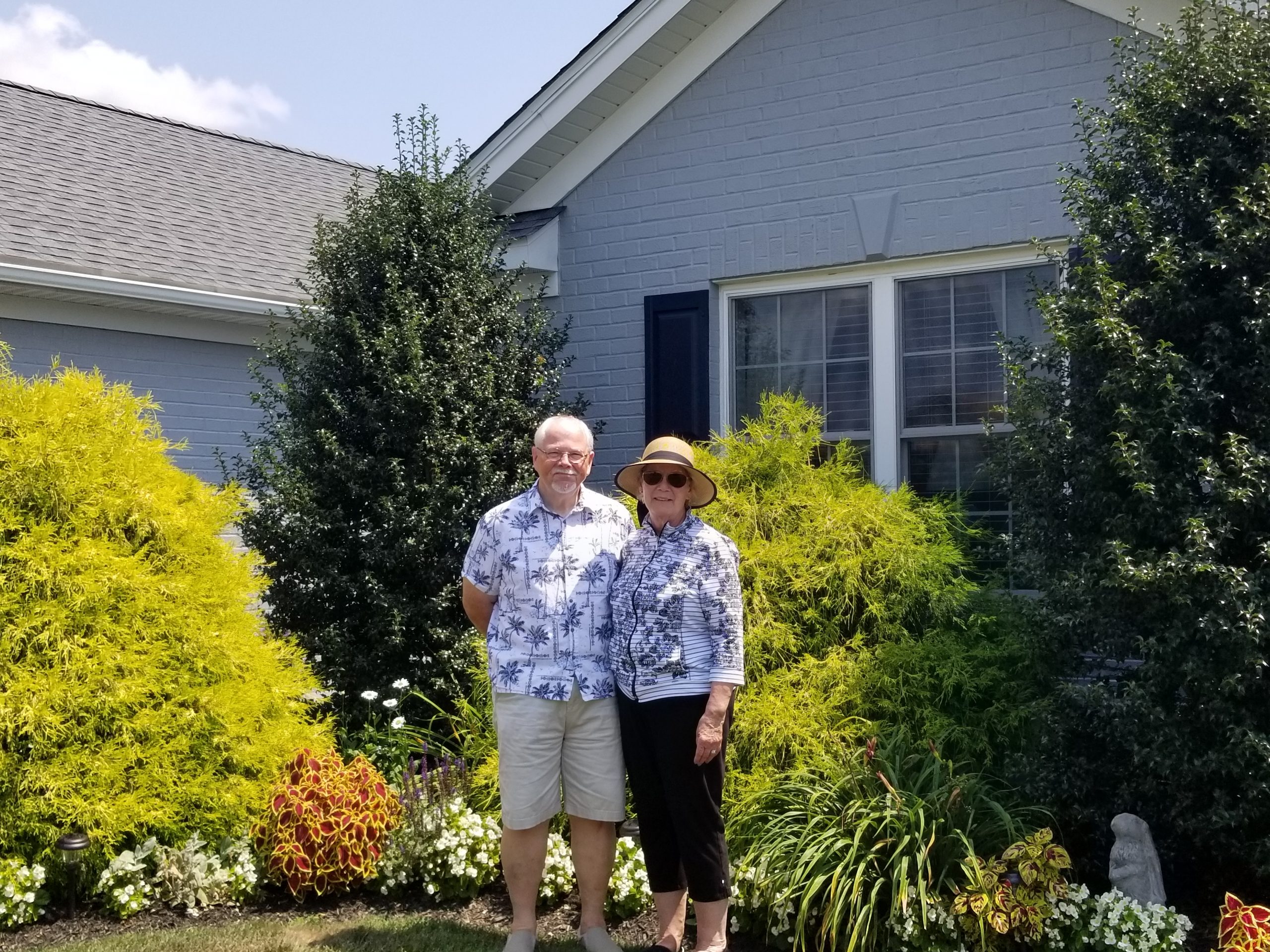 Posted On June 27, 2016 ~ 0 Comments
The Gettysburg Garden Club, through its Yard of the Month Committee, is pleased to present its June, 2016, Award of the Month to Jeannette and…

September 2018 Garden of the Month

Posted On June 17, 2015 ~ 0 Comments
Donna & Chuck Criswell, 555 Millhimes Road The Gettysburg Garden Club is thrilled to announce its June Award of the Month to Chuck and Donna Criswell,…