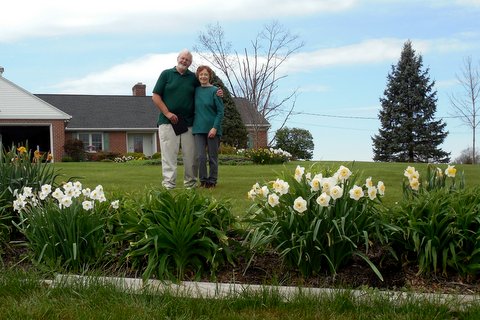 The Gettysburg Garden Club, through its Yard of the Month Committee, is pleased to announce the second feature of the SPOTLIGHT garden series. SPOTLIGHT focuses on a special, unique property occasionally throughout the year. This SPOTLIGHT shines the light on the property of Betsy and Jon Griffiths of 1951 Herr’s Ridge Rd. and their Daffodil Delight!

The Griffiths’s garden got its roots in Chambersburg  in the early 1960’s, when Betsy’s father, general practitioner Dr. William Bender, started breeding daffodils. He spent 30 years growing the seeds, hand selecting the best pollen to cross breed with the best stamen of another cultivar. After a 7 year wait, he would find out if that seed produced the desired results. He was successful, several times, winning the American Daffodil Society’s silver and gold medals, and the prestigious William Pannill Award. According to the American Daffodil Society, Inc., the William Pannill Award is given in recognition of a named standard daffodil which has demonstrated winning show qualities for a minimum of 5 years following registration. His cultivars “Conestoga,” “POPS Legacy,” and “Tuscarora” were all acknowledged in this way.

Dr.Bender, created about 30 cultivars but named only about 20 of them. “Conestoga” was his most successful and Betsy’s favorite. Most of them are named after Pennsylvania places such as Kittochtinny, Tuscarora, and Sideling Hill.  He passed away in 1997 leaving his daffodil legacy to his children.

Which brings us to the Griffiths, when they purchased their 1960’s ranch in 2012 they dug up 3000 of Betsy’s father’s bulbs and transplanted them to their new home. Jon said that all the bulbs were in the ground before the Griffiths even moved in their furniture, because they needed planting before the ground froze. Since then Jon and Betsy have been enjoying the array of color that arrives every spring and last for about 6 weeks. Mixed in with the mature landscape of weeping cherries, blue holly, and maples, varieties such as “Conestoga” with its white petals and orange cup, the brilliant yellow of “POPS legacy’,”and the pale apricot hues of “Aurora Borealis” look stunning lining the fence that leads to the backyard fish pond. Beyond the pond on the ridge is the long rectangular daffodil garden which consists of about 130 cultivars.

The Griffiths tried their hand at entering flower shows in the 1990’s but Betsy said they would rather educate people about the differences in daffodils and stay out of the spotlight. Jon, a retired organic chemistry professor at Stockton College, and Betsy, a former medical technologist, love to sing and met while singing in the Gettysburg College Graduate Choir. Both share responsibility in the gardening efforts.  But according to Jon, Betsy is the record keeper. When the daffodils die off, they plant their beds with marigold seeds to offer color the rest of the growing season.

Betsy offers the following advice to novice gardeners. Map out your flower bed in your head and on paper to see how the plants will fit, and think of the mature size as well. She says to buy quality plants from a local nursery, whose  plants will be more adapted to the local environment.

Better yet, she suggests asking a friend or neighbor for clippings or plant sections when they split their perennials or dig up bulbs. Jon commented that no matter what soil you have it is always best to add some peat moss or mushroom substrate, because “You can never go wrong with too much organic material.” Water your plants well for a few weeks until they settle in. Both Jon and Betsy said to keep in mind the weeding and pruning, as they take up time. They both added, “Don’t overreach.” Most importantly, Betsy said to find what suits you, and don’t be afraid to try new things.

After living for 40 years in Southern New Jersey, the Griffths’s say they are enjoying the peaceful, quiet life that the view from atop Herr’s Ridge offers of protected farm lands with the mountains in the distance. And, of course, their daffodil delight!

If you are interested in learning more about daffodils the American Daffodil Society is having a daffodil show in Chambersburg April 22 and 23, which Betsy says is one of the best in the country. 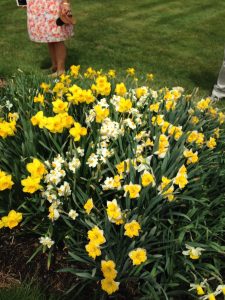 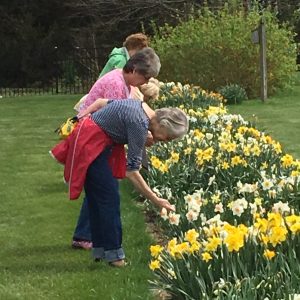 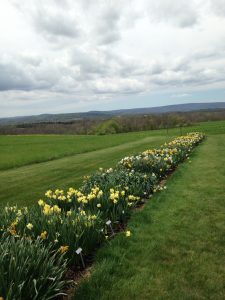 ​If you would like to nominate your own or someone else’s property for either the SPOTLIGHT or AWARD of the MONTH, please call submit your entry online.

Please view our May display in the Gettysburg Library that will feature extra photos and information about this wonderful property.

Posted On June 17, 2015 ~ 0 Comments
Donna & Chuck Criswell, 555 Millhimes Road The Gettysburg Garden Club is thrilled to announce its June Award of the Month to Chuck and Donna Criswell,…

August 2018 Garden of the Month