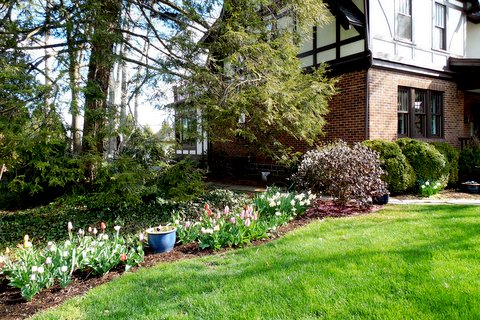 The Gettysburg Garden Club, through its Yard of the Month Committee, is pleased to

present its April 2016 Award of the Month to David Rice and Dora Townsend, of 145 W. Broadway, in the borough.

David and Dora, born in Biglerville and Baltimore respectively, met through mutual friends after college. Thirty years ago, they bought their present home, next door to where Dave grew up! He, as President of Rice Fruit Company, is still working, while Dora is retired from Gettysburg College.

This property immediately feels like an old friend’s home. Coming up the street, the passer­by first notices David’s landscaping in the street’s median. Here, he has used crepe myrtle, bush­form magnolia, dogwood, crab apple, ornamental grasses, and forsythia, all standing tall over daffodils below, to create a spectacular extension of his property.

As the eye turns to the property itself, five beautiful, evenly­spaced Japanese cherry trees, planted curbside, proudly stand like graceful ballerinas waiting to take their bow. When the proverbial curtains part on that stage, the proud 1915 Tudor­style home, with its large inviting porch, appears, perfectly framed and lovingly protected by stately, old, black walnut and eastern hemlock trees, among others.

Anchoring the house are two well­maintained flower beds that sweep across the property, like a well­behaved marching band. To the right of the front steps, in front of the porch, stand several hollies, a ground cover, rhododendron tree, and burning bush. This is fronted by a short boxwood, rhododendron, green and white leaf euonymus, and daffodils, with a parade of tulips interspersed across the front, for more wonderful color. Yellow and white pansies hold their own in blue pots and a double shepherd’s hook, while other blue pots display purple gem rhododendrons.

Drawing the eye up the steps, to the front door, with its pretty wreath, the visitor finds blue­potted purple and white pansies, smiling like little children waiting for ice cream. To the left of the walkway is another flower bed, bordered in back by a large boxwood, and other greenery. In the front are pink and white alyssum and pink heather. Then come yellow and white daffodils, an azalea and a PJM rhododendron. Interspersed among these plants are three blue­potted rhododendrons, a double shepherd’s hook bearing purple pansies, and a blue pot with purple and white pansies, for additional appeal.

Here, at the corner, a stone path leading from the front walk cuts through the bed to continue around the side of the house and beyond, where more wonderful colors will soon take center stage. The extension of this front bed, to the edge of the property, sweeps the eye along its ivy ground cover in the back, azaleas, yellow and white daffodils, and several more blue­ potted pansies. David and Dora’s signature plants ­­­the tulips­­­ parade in a long line, across the front of the bed toward the crepe myrtle at the end.

A smaller bed, at the front left corner of the property, holds more daffodils, plus three red pots of purple and yellow pansies, and some ornamental grasses for movement in the breeze. As the season progresses, the many waiting plants and trees on this lovely property will proudly display their colors also….. a continuing “sight to behold.”

David is the gardener, while Dora is the lucky recipient of his efforts.. She loves the welcoming feeling she gets when she comes up the walk and is greeted by all the beautiful flowers. As she leaves home and sees the gorgeous flowers all the way into the median, she is again filled with joy.

David’s favorite landscaping chore is mulching! He loves its smell, and the neatness of the beds. He chooses plants for their foliage, texture, and colors, and blue (his favorite color) pots for added color, height, and appeal. Because it is Dora’s favorite color, he also makes sure to include something pink.

When asked what he did first to change the landscaping, he reported that he took down a couple of maple trees, for more light. He is also pleased that years later, he was able to buy 15 feet of the property next door, which added needed space to his side yard. The challenges now are the black weevils that make themselves at home in June, and the black walnut trees, which do not allow other plants to grow nearby.

Asked his best tip for the novice gardener, David replied, “Foundation planting.” which “attaches” the house to the ground. As for beginning landscaping, he quickly stated, “Master perennials; they add so much so easily.” And, “Plan how you want the flower beds to look.” Lay garden hoses in different outlines.

Questioned about gardening on little money, he noted that pots are pretty with pansies, begonias, or geraniums, for little cost, adding that “They add color and texture, and are good for special situations.”

Cornelia Saltzman, a member of this month’s selection committee, noted the property’s “successful, artistic composition.” It is truly a masterful showcase of early spring beauty, with the promise of more to come as the weeks pass.

As advertisers say, “Watch this spot!” This will only get better. Congratulations to David and Dora.

If you wish to nominate yourself or someone else for the Award of the Month, please submit through our website, or call Lorainne Farmer at (717) 253­7730.

Posted On July 4, 2019 ~ 0 Comments
The Gettysburg Garden Club through its Garden of the Month Committee is pleased to present the garden of the month award to Tom and Erika…